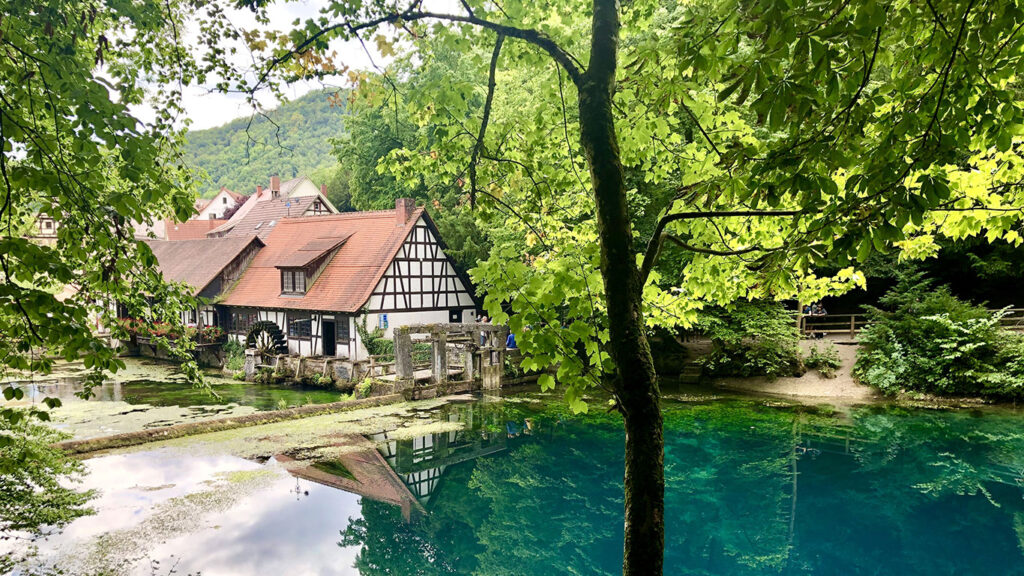 Spend the Day at the Blautopf in Blaubeuren

Visitors may notice that the Blautopf looks a bit magical and even mysterious with its striking blue and green colors. Its turquoise water has been the source of myths and fairy tales throughout the years.

One of the most well-known fairy tales is “The Story of the Beautiful Lau”, in which the poet, Eduard Mörike writes about a water nymph that suffered from depression and could only give birth to stillborn children. Lau’s husband sends her away to the Blautopf where she must break her curse by laughing 5 times. Eventually, Lau regained her laughter in order to break the curse and was able to return home. Some still say you can hear Lau’s laughter at the Blautopf…

Where Does the Blue Color Come From?

One can’t help but wonder, how does the water get its beautiful blue glow? Simply put, the blue color results from a physical effect of light scattering on the nanoscale lime particles in the water. Due to the small size of the limestone, the blue light is scattered and creates a shimmery blue turquoise tone. Naturally, the color varies a bit day to day based on the amount of sunlight and precipitation.

Next to the Blautopf, you will find a historical water-powered drop hammer mill. The hammer mill was once a working blacksmith’s shop from 1804 to 1889. In 1964, the mill became a museum. Today visitors can view an authentic blacksmith’s workshop where tools were manufactured for years.

Next to the museum is a nice gift shop and a restaurant. We stopped at the gift shop to pick up some cold drinks and a few souvenirs before heading out for the day. Unfortunately, we did not make it to the museum on this visit. But hopefully next time.

The highlight of our trip was viewing the beautiful blue-green waters of the Blautopf. It was a sunny day, which gave way to clear visibility in the water. In certain parts of the spring, I was able to clearly see the bottom. I only wish I could have captured how stunning it truly was on camera.

My kids were eager to run off and explore the short hiking path around the Blautopf. It was a family-friendly path that took us about 10 minutes to walk while viewing the spring and the wooded area. There were also several other paths to choose from. Visiting the Blautopf was a peaceful and relaxing way to spend the day. An added bonus was plenty of space for the kiddos to run around and have some fun.

Blaubeuren offers a unique experience by taking a nostalgic tour on their train, Blautopfbähnle. Here you will find multiple touring options offered in English to fit your needs and preferences.

On weekends from April to October, the train rides through the charming streets of the medieval city of Blaubeuren. The Blautopfbähnle begins directly at the historic hammer mill and drives to the viewpoints and sights in Blaubeuren and the surrounding area.

For the most up to date information on tours, admissions, and schedules please visit the Blautopfbähnle website.

After your exciting explorations, if you find yourself hungry or thirsty, you will definitely want to stop by the Café at the Blautopf. We enjoyed having lunch there at a table right on the water. The restaurant is centrally located at the Blautopf between the monastery complex and the historic hammer mill.

Immediately next to the Blautopf is a former Benedictine Monastery. The monastery dates back to 1085 and there are tours offered daily. On display are the unique medieval works of the high altar and the choir stalls. Also, you are able to view Germany’s only preserved monks’ bathhouse, which was built-in 1510. My husband and I appreciated the architecture and learning about the historical background of Abbey church and the monastery.

Nearby, you will find caves on the southern edge of the Swabian Jura. They are among the most important paleolithic sites in the world. Neanderthals and early modern people lived here during the last ice age.

UNESCO World Heritage recognizes 6 of these caves. You can access the caves by foot, by bike, or through a guided tour. For more information on how to visit these stone age caves and for the most up to date information, please visit their website.

If you want to dig a little deeper, The Museum of Prehistory – named URMU – is the central Museum of Ice Age Art of the Swabian Jura. You can take a visit to learn more about the living conditions and the lifestyle of paleolithic hunter-gatherers in the region.

The museum will take visitors back 40,000 years in time. The museum takes a look at how early modern humans created animal and human figures out of mammoth ivory. Musical instruments, ice age jewelry, and other works of art are also on display to see.

We didn’t get a chance to explore the museum on this visit, but we did drive out to one of the Unesco World Heritage caves. Unfortunately, we found that the cave was closed due to the coronavirus pandemic. So be sure to check before you arrive.

Plan Your Trip to Blautopf

So now you have a lot of information to start planning your trip to the Blautopf in Southwest Germany. As you can see, there is much to discover. You won’t regret exploring the charming town of Blaubeuren. I promise.

Is the Blautopf on your bucket list to visit?

Any questions? Feel free to ask away. – Kristie xo